Paintings, only in the sense they are framed

His painted constructions are based on the extraordinary use of plasticized fretwork of thin, papery strands, with several lattices and skeins of colored pattern layered and relayered back into a deep box frame.

I have not seen this technique from anyone else; Bilu has refines the idea since his last exhibition, and introduces quite astonishing effects.

One of these (Haywire) looks rather like a glass case packed with exotic tropical butterflies. Another (Eye Opener) offers a family of pop-eyes surreal shapes that gaze at you from dark space, like odd creatures starring (sic) out from the night of the mind.

Sometimes these mysterious cobwebbed structures are studded with bright, staccato blobs, the colors fused together as if hoping to weld in place the uncontrollable threads of some mad electrical circuit.

Others (especially the grey ones) are locked into a rich and delicate tracery very like a Mark Tobey painting. Bilu provides even more variety: some works seem to be created from re-cycled plastic toys; some resemble unplayable pinball machines; some are tightly stretched and looped and woven as if by mechanical spiders.

None of these densely worked objects are paintings in any conventional sense; except that they are framed, self-contained, and sometimes look like flat pictures from a distance. They are 3D arrangements made with an almost musical, tinkly glitter that goes well with the visual sparkle.

Bilu is confident enough to ignore the heavy trends towards gloomsville and to go about his happy business as usual. This is an excellent show.

Asher Bilu’s works at United Artists (42 Fitzroy Street, St Kilda; ends 26 July) prove that curiosity and inventiveness are not the exclusive possession of the young.

Capitalising on the unique properties of a new paint called Plastol, Bilu’s paintings float layers on layers of colored lines before a darkened background plane so that they form dense labyrinths.

In a handful of works the lines thicken and bulge, and sprout mushroom-like discs. Bilu’s art has often been construed as cosmic in its associations, but these works suggest that it is primarily concerned with the pleasures of its own creation. It’s a leap, I know, but mushrooms are just the image he needs.

Meditations of the surreal thing

The non-arrival of an invitation to Asher Bilu’s Recent paintings made me all the more curious to view the opening exhibition at The Art Gallery. Knowing of the over sensitive reactions to my past reviews of Bilu’s work, I half expected to be denied entry to this classy establishment in what is traditionally a scungy part of Greville Street, Prahran. (Don’t laugh – artists and galleries have been known to ban art critics from shows.)

A few weeks ago I wrote in this column of the crowded showroom effect of Deutscher Gertrude Street’s display of post-1960s Australian art. Formerly a collector’s market divided into various stalls, The Art Gallery is spacious enough to accommodate the large sculptures of Victor Meertens, Giuseppe Romeo and other gallery artists.

With the Bilu exhibition, however, we see the gallery as another kind of showroom, despite the ample spaces between each exhibit. I am sure this has something to do with the paintings, which, although hung on the walls, are housed in large, chrome display cases. These are necessary, as Bilu’s pictures are more like crazy cosmic cousins of pop-up books than conventional paintings.

To say they consist of 3-D layers of plastic grids and cutout shapes is to give no indication of the excess of visual activity in each work. One is both repelled and fascinated by the all-over frenzy of the confetti-peppered grids in Infinities recur Endlessly or the blobby fish-eyes in The Eyes Have It. But don’t get me wrong: Bilu’s grids are as precisely calculated as any geometrician’s. All the time, I kept wondering where one would keep them. That is until I read in the visitor’s book, “I want one in my bathroom”. 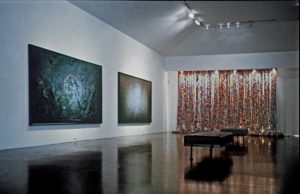 Suspend your taste; but not the rest of your brain. Look at the paintings. They belong not just to a modernist program; like practically every idea, the Greeks recorded it first.

It is the idea that the value of each of the arts lies in its purity, the stuff that it is made of, its material determination. Not even the Renaissance could erase that thought. Leonardo’s idea of imaginative invention in painting haunted painters until the 18th Century when Cozens used the idea to invent his method and taught it to Turner.

What evolved was a way of painting by pushing the medium around until it looked like a landscape; by mimicking the operation of nature instead of merely copying it.

The method worked best as atmosphere, and the Chinese had been using it for 1000 years. Foe the West and the East this manipulation of the medium became the stuff of dreams.

The Chinese considered verisimilitude child’s play, but in the effort to conjure up their dream-work they resorted to many tricks, systems of procedure and consciousness; so did Western painters, with difficulty, because of their doctrines of reality.

Asher Bilu uses numerous devises to make a variety of different painting modes in this exhibition. He has been painting for a long time and his considerable bag of tricks are (sic) being continuously extended.

Some of the paintings come close to being sculpture, where they have become more objective; as if made by natural phenomena (eg ‘In the Beginning’ ) or by industrial manufacture (eg ‘Color Fall’). But some paintings look like paintings, illusionist and representational (eg ‘Starry Night’).

In this kind of painting, as in any painting, the viewer has work to do. From what point do you view the picture? In traditional painterly realism, from a certain vantage point the imagery gels in the eye of the viewer; space and volume settle down from being a mess of color, line, and shape to clearly represent things in perspective. In Asher Bilu’s paintings you tend at first to see a wall of paint (stuff), but at closer encounters the surface reveals the layers that form it. This is a physical fact, but that is an invitation to imagine.

Bilu’s painting is primarily concerned with getting the viewer to dream-work.

If the painting is to fully operate it must have the capacity to lure us to look and trigger our imagination which inevitably will strive to convert the abstract into representation. Bilu’s work in various ways manipulates us, to step back, come forward, look in, fall in. Our gaze is tricked to trip, and it is not difficult to understand how this kind of painting is associated with mechanisms to play with the mind, from drugs to psychotherapies; for the artist to make it and the viewer to see it. Here lies the basis for many romantic myths about creativity and originality, art and the artist.

The Frenhofer factor is a desire to make concrete a dream of pure painting. In Balzac’s 1830 (here comes photography) story ‘The unknown Masterpiece’, his fictitious 17th-Century painter, Frenhofer, dies in his effort to reinvent painting. He gets to the stage where all that can be seen are “colors piles one upon one another in confusion and held in restraint by a multitude of curious lines which form a wall of painting”.

If you look carefully at Asher Bilu’s paintings you will often see a spun grid; a time line of endless improvisation of media on themes of illusion and allusion. The illusion of space through veils of detail formed by hue and tone, shape and line, overlapping and interacting.

The “veiled infinite” that creates the illusion of light is the greatest trick in painting. The “light that looks at you” is the atmosphere of fear, faith, music and smiling. These paintings at their best can conjure up these feelings. ‘Over the Top’ is the stuff of laughing and that’s the best painting.

Asher Bilu’s “sculptures made of paint” are large, highly detailed skins of painted resins, stretched and layered. Here the paint is both medium and support, blurring the distinction between painting and sculpture.

Bilu’s vibrating abstract marks – dashes, swirls and whorls – are reminiscent of micro-photography – sections of highly magnified cells or subatomic particles; a myriad of neon flickers, a carpet of melted lollipops. The artist says he is striving for “perfection in imperfection”, using the language of abstraction to “express the beauty and mystery of our existence in an infinite universe”.

The artist has arrived at his technique after 10 years of experimentation. It involves painting a glossy, enamel-like medium on to non-porous sheets which are then peeled and mounted on to frames. The sensation created by painting on clear resin is that of a suspended field of intricate colour and pattern, which could, but for the frame, continue to extend outwards. This, and the perception that Bilu’s marks exist both individually and as part of the overall design, reinforces his grand theme of defining “infinity in terms of beauty”.

The Israeli born artist has live in Melbourne since 1957 (sic)

(Asher Bilu, until August 11, at the Coventry Gallery, Paddington.)